The launch of Black Mesa 1.0 is imminent.

Black Mesa, a fan-made remake of Half-Life in the source engine. It was initially announced way back in 2005. Until recently, the game was pretty much complete, just lacking the final Xen chapters - the last obstacle Gordon Freeman had to overcome in the original game.

Crowbar Collective has developed the original ending of Half-Life, as well as remaking the original first 4 chapters with some stunning visual development.

When half life 2 was launched, Valve released a new version of the original game -Half-Life Source, using the source engine to render the game. This was the original inspiration behind fully re-remaking the game.

In 2015, a Steam early access version of the game was released, but without the addition of the Xen chapters.

Black Mesa keeps many layouts and environments intact while improving the less popular aspects of the original. Characters, weapons, and objects have been redesigned to take advantage of the more powerful source engine. They have redesigned the environment with smoother platforming, new puzzles, and enemy encounters. 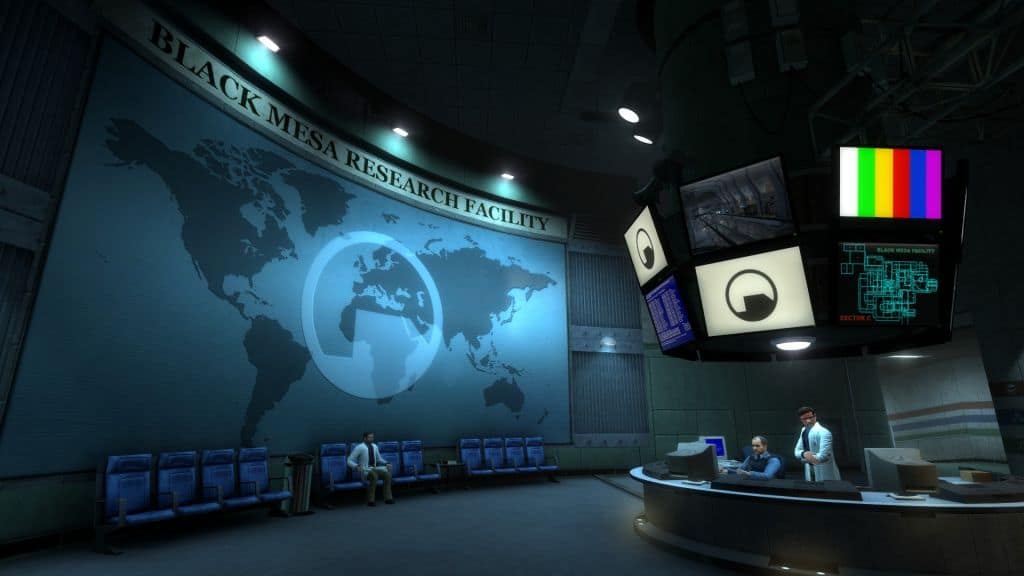 The most considerable areas of improvement include the visual aesthetics, with significantly increased poly counts and higher textural resolution. Better contrasting brings out the finer details, a broader color palette is employed, and edges have been smoothed. Fantastic dynamic lighting effects create realistic atmospheres. The explosion and fire effects and the overall improved animation are impressive. All of this, while maintaining the style of the original title. The sound effects have been massively developed, and there is new music.

The characters have better agility, which improves the pace of the game. The enemies remain familiar but with a higher definition. New cave networks and swamps allow greater exploration and appreciation of the alien world. The scaling and layout of each level have undergone a dramatic overhaul. There are improved weapon models, new scripted encounters with a higher range of NPCs. Overall the game has a much higher level of sophistication.

The alien world of Xen in the final act of the game is absolutely outstanding. This section of the game was in development for years and only entered open beta last month, which you can try through Black Mesa Steam properties.

Some believe that Black Mesa should be played after finishing the original Doom inspired masterpiece. Still, for anyone wanting to play Half-Life for the first time, Black Mesa is a modern version of the events that preceded Half-Life 2. However, some say it may not recreate the original intent of the game. Although the graphics of the original are dated, the game-play is still pretty good. Half-Life was a pioneer of story-based exploration and active character development; also, it was the game that popularised the WASD control default configuration. Having experience in the original version allows a greater appreciation of just how remarkable the game's evolution has been.

The original design of Half-Life was through the collaboration of engineers, level designers, writers, and animators, rather than working compartmentally, which resulted in a game with unique design, finesse, and depth.

Continual development of the game depends on player feedback and examination through the lens of the player experience. The Crowbar team will continuously work to identify rough gaming spots and refining the visuals.

"We’d also like to continue to improve the workshop and organize team and community events to document as much as we can about the Source engine and how to best use it."

You can experience the whole thing in its entirety in public beta before it leaves early access.